Chicken and Seafood Paella is your answer to the many paellas out there that are so intimidating to make and/or you don’t eat chorizo.  Do not fear, your paella answers are here!

Paella is one of the few rice dishes that cooks uncovered.  My instinct kept making me grab the lid and try to cover it but there is no need!  But don’t run off now using any old rice and think it will cook well uncovered, paella is made using Bomba rice which is found at almost any supermarket.

If you’ve ever watched My Big Fat Greek wedding then you know the father that kept trying to trace every word back to the Greek language.  Well, sometimes I feel like I’m him and I somehow find a link back to the Arab language or Arab times.  Have you seen my article about how tacos have Arab origin? You can read it here.  History is so interesting like that so it’s not that far fetched that paella ALSO has Arab origins.  Let me explain myself.

According to the Paella company, Valencia in Eastern Spain is the undisputed home of paella. It is one of the largest natural ports in the Mediterranean and has been one of the most important rice-producing areas in Spain since rice was introduced by the Moors over 1200 years ago. In fact, the Spanish word for rice is ‘arroz’, which is derived from Arabic, not Latin like most of Castilian Spanish.

It is also undisputed that Paella has humble roots and was a farmers and workers food.  If you swap the “p” to a “b” then the word pronounced “ba’aya” becomes the Arabic word meaning leftovers.  It has been widely said that the dish originated as just throwing together the leftovers with some rice to feed the workers who would all eat communally directly from the pan with their own wooden spoon.

In fact, to this day if you order a traditional paella there is no seafood in it but instead chicken, rabbit, and snails with green and white beans.  Over time everyone adds their own touch and now there are over 400 paella recipes and from experience it seems most of them include chorizo.  Which adds amazing flavor I’m sure, but for some people that don’t like chorizo this is an excellent alternative.  As as always, it comes together in less then an hour which is always a plus. 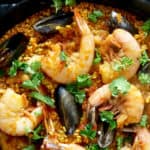 Chicken and Seafood Paella is just as delicious if not more delicious than paella made with chorizo.

Pan – for even cooking and heat delivery, its critical to use a heavy pan that will conduct and maintain heat, preferably carbon steel, but cast iron can be used as an alternative Rice – use Bomba rice for best consistency. Once rice is added and distributed, do not stir any further as this will cause it to release starch and become sticky. Rice should be firm and fluffy

Chicken Stock – rice should remain hydrated for 18-20 minutes. If the chicken stock evaporates before it is done, lower heat and add additional ½ cup of reserved chicken stock

Friends, sisters, foodies, bloggers. I (Nadia) started this and would basically force (I mean, she did love it) Deana to help me until we realized we collaborate so well together that we should combine our creativity and do this together! So together, we bring you our favorite Middle Eastern dishes handed down from both our families and our modern interpretation of them. We really hope you enjoy! If you want to know more about us →

get exclusive Sweet Pillar content straight to your inbox.