Pumpkin Kibbeh is a game changer! Kibbeh used to be for superstar kitchen cooks but now you can make this is no time and even ahead of time!

Pumpkin kibbeh is basically the middle eastern version of shepherd’s pie.  It’s a savory pie made with meat and bulgar wheat filled with a variety of fillings but most common a meat, pine nut and onion deglazed with pomegranate molasses for a sweet and tangy taste.

Kibbeh is made several ways, most common is forming the dough into a football shape with the filling inside or in the oven in layers of dough and filling.  It is usually served with lentil soup and traditionally when eating it one should alternate a bite of kibbeh with a sip of soup.

First a layer of pumpkin kibbeh dough, then a layer of the meat pine nut filling

Top the meat filling with another layer of pumpkin kibbeh dough. Make sure not to make it too thick because remember there is a layer at the bottom and a layer on top.

For those that are not familiar with kibbeh you must know that it’s a labor of love.  Women would gather together and make kibbeh; especially the football shaped ones.  A special machine is needed to ground the meat and bulgar so fine that it forms into a dough.  Some women were better at forming the shape with the dough and they were known in the community.  So and so is good at “kabkabing”.  Sometimes women would make their filling and dough and get their girlfriends that are good at it to make the shape for them.  So you get that kibbeh is a big deal.  In fact, it’s such a big deal I’ve never even attempted to make it.  I was too intimidated to be honest and I would get my fix when my mom would visit.

Years ago I came across Tony’s site

and I was in love!  He made every dish seem accessible, easy to make and most important delicious.  I noticed he had a pumpkin kibbeh recipe on his site and I had at that point never even heard of pumpkin kibbeh.  After finding out that Tony spent some time in Aleppo, I wasn’t surprised to see such an elaborate take on kibbeh because Aleppo is famous for all the different varieties of kibbeh.  It’s said they have over 100 different variations!

His recipe didn’t intimate me but I still let it simmer in my mind for some time before I actually decided to make it.  I did tweak some things around and used a meat filling instead of making it fully vegan (more so because of limited time and not being able to cut and roast all the veggies) Although now that I know the dough is so simple, I am going to plan ahead and make a full vegan one with all the roasted veggies because it sounds amazing!

I also cut another corner and used pumpkin puree instead of cutting a pumpkin and roasting and then pureeing.  I found everything I needed at Sprouts supermarket except for the fine bulgar.  They do carry a slightly coarser kind so if you absolutely cannot find the fine bulgar just use the coarser one and blend it in the food processor.

You guys have no idea how excited I am about this!  I now have another go to dish that’s super simple and delicious.  There will be dough leftover so I just froze it so I can pull it out next time for an even easier dinner!  Let us know what you think! 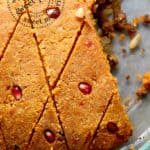 This once super complicated traditional dish is now a super easy weeknight dish that comes together in no time!

Friends, sisters, foodies, bloggers. I (Nadia) started this and would basically force (I mean, she did love it) Deana to help me until we realized we collaborate so well together that we should combine our creativity and do this together! So together, we bring you our favorite Middle Eastern dishes handed down from both our families and our modern interpretation of them. We really hope you enjoy! If you want to know more about us →